The tobacco endgame – ending tobacco use and nicotine addiction in the U.S. – is within sight. About 14 percent of people in America smoke. The goal is to drive that rate down below five percent to save millions of lives.

The kids are not all right.

The 2018 National Youth Tobacco Survey showed an alarming surge in e-cigarette use. Vaping is now the most popular way for adolescents to use tobacco. From 2017 to 2018, usage rose by 78 percent for high school students and 48 percent for middle school students.

Many kids falsely believe e-cigarettes and other tobacco products are safe. Some don’t even realize they contain nicotine. But these products can deliver much higher concentrations of this addictive drug than traditional cigarettes. For example, a JUUL prefilled liquid pod contains as much nicotine as a whole pack of cigarettes.

According to the U.S. surgeon general, exposure to nicotine during adolescence can cause addiction and harm the developing brain. But there’s no safety helmet to protect kids from this growing danger.

Here are the top reasons young people give for using e-cigs:

The youth tobacco epidemic is a serious public health threat. We know nearly 90 percent of smokers first try a tobacco product by age 18. But if people don’t start using tobacco by age 26, they are likely to never start. Our focus must be on prevention at this critical stage of life.

Tobacco companies promote e-cigarettes as a way to help smokers quit. But much more evidence is needed to show their effectiveness for quitting cigarettes and other forms of tobacco.

These products may help some smokers quit or move to a less harmful product, but they can also lead to “dual use” – continuing to smoke traditional cigarettes and also vaping. So even if e-cigarettes are less harmful than traditional cigarettes, those benefits are erased when both products are used. And dual use makes it even harder to quit because of the increased nicotine exposure.

Studies have also shown an association between vaping and other substances: alcohol, illegal or recreational drugs, and misuse of over-the-counter and prescription medications (such as opioids).

The truth is, there is no “safe” tobacco product. We don’t yet know the long-term health effects, especially of these newer products.

Most people don’t fully understand nicotine addiction and its health threats. Health care professionals need to be able to talk with patients about tobacco use, including e-cigarettes and these newer products. Thorough training and education can help make these conversations more meaningful and informed.

Seeing through the smoke screen.

And yet, tobacco companies have grown bolder in their efforts to keep people addicted and misinformed:

How do we get to the tobacco endgame?

Reaching the tobacco endgame and preventing use by kids and young adults will require strong government oversight. We need stronger regulation of the design, manufacturing, sales and marketing of all tobacco products. For example:

We must also continue to support proven strategies and public policy, such as:

How you can help.

Several types of products are now attracting new users through appealing flavors, aggressive marketing and social media engagement. Here are a few you should know about.

Cigarillos – Small cigars that resemble traditional cigarettes but are often exempt from regulation that applies to cigarettes. They tend to be low cost and come in flavors. They are the tobacco product most used by black adolescents.

E-cigarettes – Electronic devices containing a nicotine-based liquid that is vaporized and inhaled to mimic the experience of smoking cigarettes.

JUUL – One of the most popular types of e-cigarette that became available in the U.S. in 2015. Because of its small size, appealing flavors, less harsh inhale sensation and minimal vapor clouds exhaled, usage by kids in schools has become a nationwide epidemic. There are now several similar products under different brand names.

Heat-not-burn products – These devices generate an inhalable aerosol by heating tobacco at approximately 500°F rather than burning.

Hookah – A tobacco pipe with a long, flexible tube that draws the smoke through water. Often used to smoke flavored tobacco in a social group setting or “hookah bar.” 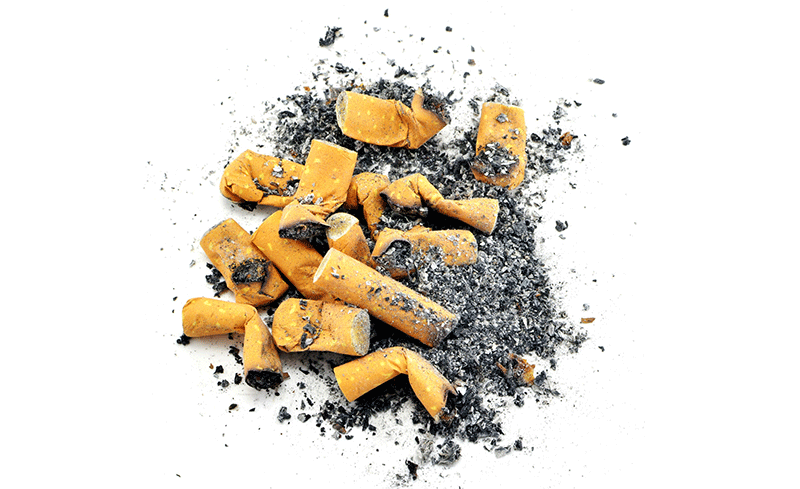