Before the American Heart Association existed, people with heart disease were thought to be doomed to complete bed rest — or destined to imminent death.

But a handful of pioneering physicians and social workers believed it didn’t have to be that way. They conducted studies to learn more about heart disease, America’s No. 1 killer. Then, on June 10, 1924, they met in Chicago to form the American Heart Association — believing that scientific research could lead the way to better treatment, prevention and ultimately a cure. The early American Heart Association enlisted help from hundreds, then thousands, of physicians and scientists.

“We were living in a time of almost unbelievable ignorance about heart disease,” said Paul Dudley White, one of six cardiologists who founded the organization.

In 1948, the association reorganized, transforming from a professional scientific society to a nationwide voluntary health organization composed of science and lay volunteers and supported by professional staff.

Since then, the AHA has grown rapidly in size and influence — nationally and internationally — into an organization of more than 33 million volunteers and supporters dedicated to improving heart health and reducing deaths from cardiovascular diseases and stroke.

Here is a timeline of American Heart Association milestones in more than 90 years of lifesaving history:

Looking for Answers: Nearly a decade before the formal creation of the American Heart Association, physicians and social workers convene to find more answers about the mysteries of heart disease.

Scientific Sessions Begins: The AHA holds its first Scientific Sessions meeting where scientists and healthcare professionals learn the latest developments. The meeting, held every year since except for during World War II, grows to become the largest annual cardiovascular meeting in the United States and a leading international destination for the cardiovascular health community.

The AHA Reorganizes: The AHA reorganizes, transforming from a scientific society to a voluntary health organization composed of volunteers and supported by professional staff. Support for the AHA’s mission becomes much more visible, with fundraising activities taking hold in communities and businesses.

First Research Grant Awarded: The association awards its first research grant, to Nobel Prize winner Dr. Albert Szent-Gyorgyi. The grant helped fund studies about the energy that muscles, such as the heart, need to contract. In all, the AHA has funded 13 Nobel Prize winners, including nine whose AHA-funded work led to the Nobel Prize.

Steady Hearts: An external defibrillator successfully returns a quivering heart back to a steady rhythm for the first time in humans. Dr. Paul Zoll leads the study, with funding from the AHA.

First Pacemaker Implanted: The first battery-operated, wearable pacemaker is implanted in a patient. The research leading to this discovery, pioneered by Dr. William Weirich and funded by the AHA, led to the development of the fully implanted pacemakers used today.

AHA-Funded Research and CPR: AHA-funded research from Drs. William Kouwenhoven, James Jude and Guy Knickerbocker show how CPR can save lives after cardiac arrest. Their research is reported in the Journal of the American Medical Association. We now know that effective bystander CPR can double or triple chances of survival.

Pioneering Microsurgery: Dr. Julius Jacobson performs surgery with the aid of a microscope. He becomes a pioneer in microsurgery with AHA funding. Microsurgery leads to advances in coronary artery surgery, neurosurgery and numerous other procedures.

Research Shows Breaths Not Required for CPR: With funding from the AHA, Dr. Gordon Ewy shows uninterrupted, high-quality chest compressions — without mouth-to-mouth respiration — are important for keeping blood circulating to vital organs. As a result, the AHA releases new recommendations that say bystanders can skip mouth-to-mouth and use Hands-Only CPR to help an adult who suddenly collapses.

AHA Issues Statement on Hands-Only CPR: The AHA releases a statement about Hands-Only CPR, saying that bystanders who witness the sudden collapse of an adult should dial 911 and provide high-quality chest compressions by pushing hard and fast in the middle of the victim’s chest. This is a departure from traditional CPR that requires rescue breaths.

Nobel Prize Awarded to Early AHA-Funded Researcher: Dr. Martin Chalfie wins the 2008 Nobel Prize in Chemistry for developing green fluorescent protein as a genetic tag to see inside living cells, including heart cells, to better understand how the cells are made and how they work. The AHA funded Chalfie earlier in his career.

AHA Advocacy Efforts Help Lead to Tobacco Oversight: The AHA helps lead the way in the passage of the Family Smoking Prevention and Tobacco Control Act. The law lets the FDA regulate tobacco, bans candy-flavored cigarettes and adds large warning labels to tobacco products. Billboard advertising near schools is banned, and tobacco companies can no longer alter their products to make them more addictive or to make misleading health claims.

One Brave Idea: The AHA establishes One Brave Idea, an unprecedented research initiative awarding $75 million to one team focused on curing heart disease. It’s funded through an alliance of the AHA, Verily and AstraZeneca.

AHA Institute for Precision Cardiovascular Medicine: Through the institute, the AHA provides funding for researchers focused on mining massive volumes of data in their quest to solve a range of heart disease issues. The institute began collecting, linking and leveraging patients’ data to help improve heart health.

AHA Grantee wins Nobel Prize: Gregg L. Semenza, M.D., Ph.D., of Johns Hopkins University was co-awarded the 2019 Nobel Prize in Physiology or Medicine for discovery of how cells sense and acclimate to oxygen availability, the mechanism for one of life’s most essential adaptive processes. He shares the prize with William G. Kaelin Jr., M.D., of the Dana-Farber Cancer Institute, Boston and Sir Peter J. Ratcliffe, M.D., of the University of Oxford, England, and Francis Crick Institute in London. Their collaborative work established the basis for understanding how oxygen levels affect cellular metabolism and physiological function, paving the way for promising new strategies to fight cardiovascular disease and many other acute and chronic conditions, including anemia and cancer. Dr. Semenza has received five AHA research grants. The Association’s support of his now Nobel Prize winning work on HIF-1 began in 1993.

More than 90 years of saving lives

Continue reading about our more than 90 years of lifesaving history and our work that continues to pave the way in the fight against heart disease and stroke.

Read more about our history (PDF) 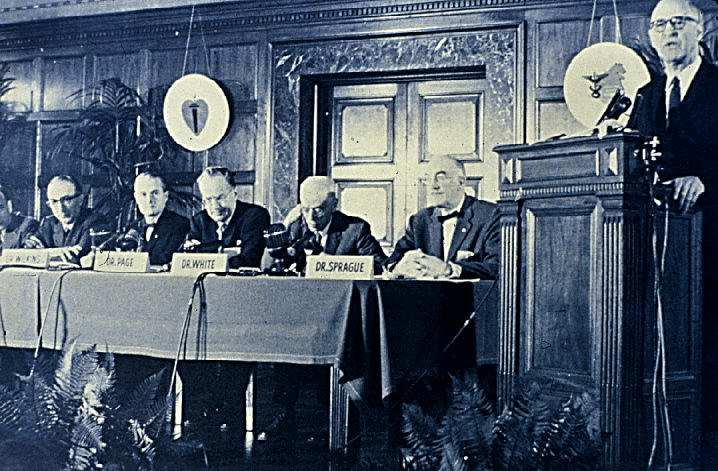