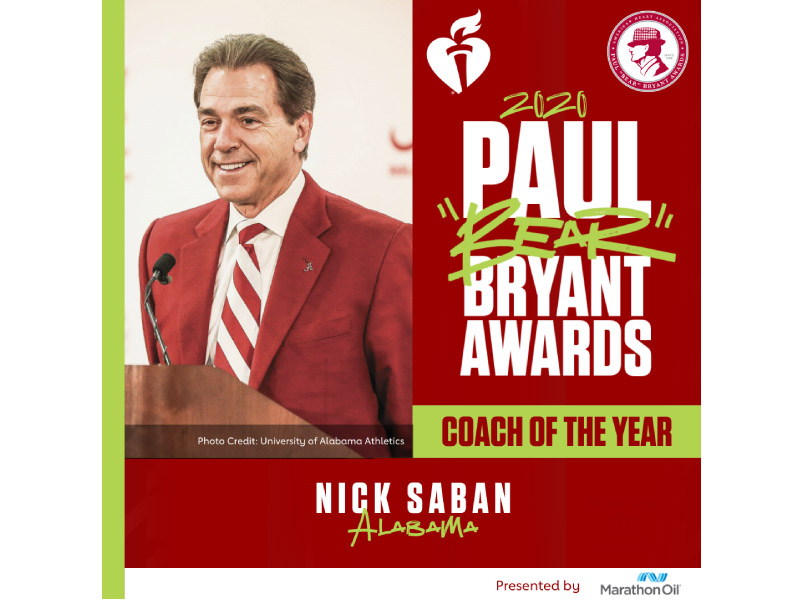 Coach Nick Saban from the University of Alabama was named college football Coach of the Year at the American Heart Association's Paul "Bear" Bryant Awards.

Saban won the Paul "Bear" Bryant Coach of the Year Award in 2003 while serving as head coach at Louisiana State University. This season, he led the University of Alabama to an undefeated record, including the Southeastern Conference Championship, and won his seventh national championship.

"On behalf of our university, our athletic department, all of our coaches and players – especially our players who made sacrifices this year to be able to compete and play – I'm very honored to accept the Coach of the Year Award," Saban said at the virtual event.

The Paul "Bear" Bryant Coach of the Year Award recognizes the country's top college football coach for coaching excellence and leadership. After Paul "Bear" Bryant died of a heart attack in 1983, the Bryant family teamed up with the AHA to honor Bryant's life. The award honors "coaches with heart" professionally and personally, and brings awareness to heart disease and stroke, the world's top killers.

Fans had a chance to participate in the awards with the online Coach of the Year Fan Vote. In a hard-fought battle, Saban won with over 7,000 votes.

The 2020 Conference Coaches of the Year awardees are: