Like all professional athletes, she knew her body. She knew the feeling of the routine wear and tear of playing tennis, and she knew the agony of a serious injury.

This didn't fit either category.

Her joints had been aching for a week. Her toes were puffy. The wrinkles on the outside of her fingers were bright red. So were her ankles. Redness even flecked the whites of her eyes.

Then there was her hair. It was falling out.

Not at 25 years old. Not for someone six months removed from reaching the semifinals of a Grand Slam tournament.

So she decided to handle it differently, too. She demanded blood work. She consulted a family doctor. Then a rheumatologist, who solved the mystery: Collins suffers from rheumatoid arthritis, or RA. It's an inflammatory and autoimmune disease with no cure but many ways of managing it.

Since getting diagnosed in 2019, Collins has overhauled her diet, training and lifestyle. The limited tennis schedule forced by the pandemic may have worked to her advantage as she further refined her plan.

Now, as she prepares to play next week in the Australian Open – the tournament where she first established herself among her sport's elite – Collins is sharing her story in hopes that others learn from it.

While her message resonates best with RA patients, it also contains universal themes. For instance, everyone should monitor their health. Because knowing something is out of whack can lead to a diagnosis and a game plan for bouncing back, perhaps even better than before.

That attitude is especially timely as we open American Heart Month, when attention ramps up on awareness of heart disease, the No. 1 killer of Americans. We also use this spotlight to remind women that heart disease is their No. 1 killer, claiming more lives than all forms of cancer combined.

In high school, Collins tested positive for an autoimmune disease. However, there are more than 100 autoimmune diseases, and doctors never determined which she had. They also thought it might've been a false positive because her symptoms went away after she passed a kidney stone.

In college, she suffered frequent respiratory infections. She also felt a variety of aches and pains that, in retrospect, were often joint-related. They became more frequent once she turned pro.

"It was kind of like, 'Oh, well, you have a wrist injury, a knee injury, you have this going on with your shoulder,'" she said. "I obviously learned how to deal with these injuries, just like any athlete."

In January 2019, Collins lost her first set at the Australian Open. She won the match, though. And the next. She kept winning, steamrolling the world's second-ranked player on the way to the semifinals, her best performance in a Grand Slam tournament.

Collins soared to 23rd in the world, best of her career, and was confident more breakthroughs would follow.

Instead, her momentum had slowed when she arrived in San Jose, California, for a tournament in late July.

After winning her opening match, she was hardly fit to take the court for the next round.

"It was painful to run," she said. "It was one of the worst feelings I've ever experienced physically."

She was suffering what RA patients call a "flare."

She just didn't know yet that she had RA.

Between the Australian Open and the tournament in San Jose, Collins had an inkling that something might be wrong. She saw her family doctor to consider whether her recurring joint pain was more than a sports injury.

In San Jose, her joint pain was more intense than ever, and accompanied by new symptoms: the redness and puffiness. Unsure what it all meant, she went to Toronto for the next tournament.

A quick, painful exit made it clear she needed answers. Instead of relying on the doctor at each tour event, she wanted to see her team of specialists at home in Florida.

Upon learning that, like her grandmother, she has RA, Collins felt "really sad."

"The day after I got diagnosed, I went from the rheumatologist to the practice courts," she said. "I was upset about it, but the show must go on. My boyfriend said, 'I'm surprised you're handling it this way.' But I've always tried to keep a positive attitude with these things. I just try to focus on the things that I can control and focus on how I can make it better. That's all you can do."

Her first challenge was finding the right medication regimen. There's always some trial-and-error. Her process was complicated by the tour's anti-doping rules preventing her from using prednisone, a steroid that's often the go-to drug for people with RA, especially to quell a flare.

Doctors also had her tested for allergies and uncovered two biggies: gluten and dairy. An overhaul of her diet followed. Out went her three daily glasses of milk and her fondness for pasta and cheesecake; in came green smoothies and another juice that she said was the equivalent of eating 50 cherries.

Then there was the issue of exercise.

RA patients must be active, even on days when their joints are stiff and sore. With Collins, the concern was too much activity. So she and her strength and conditioning coach – who is also her boyfriend – rebooted her regimen.

"I used to fly and travel for like 20 hours, then hit afterward for an hour and then do a workout. Looking back on that, it was kind of crazy," she said. "Now we monitor everything I do in training. We track how many balls I hit, how much time I spend on the court, how many minutes my heart rate is over 180 beats per minute. I have to be really disciplined."

She's also become devoted to warming up, cooling down and getting massages and acupuncture.

"I take it so seriously," she said, "because I know if I don't, I might wake up and have a flare tomorrow."

Collins also knows that, like all RA patients, she's at higher risk for heart disease – up to twice as likely as people without it. The condition also makes a heart attack or stroke more likely. The good news is that the same things done to control RA (diet and exercise) can also help prevent heart disease.

Since the flare that led to her diagnosis, Collins has endured several more.

Flares have lasted as many as 12 days, as few as five. Sometimes, the joints between her fingers get so inflamed that a touch brings her to tears. She's seen her toes twist into new shapes, swollen and bony on top.

But things are getting better.

As she's fine-tuned her medicine, diet and activity, the duration of each flare has gone down, the length between them gone up.

She hasn't had one since August.

The twist to Collins' story is that being a pro athlete masked her condition. Pains that might've been checked out sooner were dismissed as byproducts of playing tennis at the highest level.

Then again, once diagnosed, she had the tools, resources and demeanor to take on the challenge of getting her condition under control. She even had the solace of knowing a fellow tour player with RA. Former world No. 1 Caroline Wozniacki was diagnosed in 2018. Coincidentally, they faced off at the 2019 U.S. Open, Collins' first tournament since being diagnosed with RA.

"We had a great discussion," Collins said. "She gave me some really valuable insight."

Whereas many conversations with fans used to include conversations about serves and backhands, more of those interactions now involve RA. She's been amazed by fellow patients or their loved ones wanting to compare symptoms or swap notes about tricks that provide relief. She's even bonded this way with her boyfriend's uncle.

"There's a sense of community, knowing that other people are going through the same thing. We're all kind of in it together," Collins said. "It can be very uplifting hearing about people who have battled through it and have come out on the other side and gone on to do amazing things in their careers and lives."

As more people learn her story, Collins hopes the universality of her theme rings through:

Whether it's RA, heart disease or anything else, attack it like a tennis player taking on a high lob – smash it across the net with everything you've got. 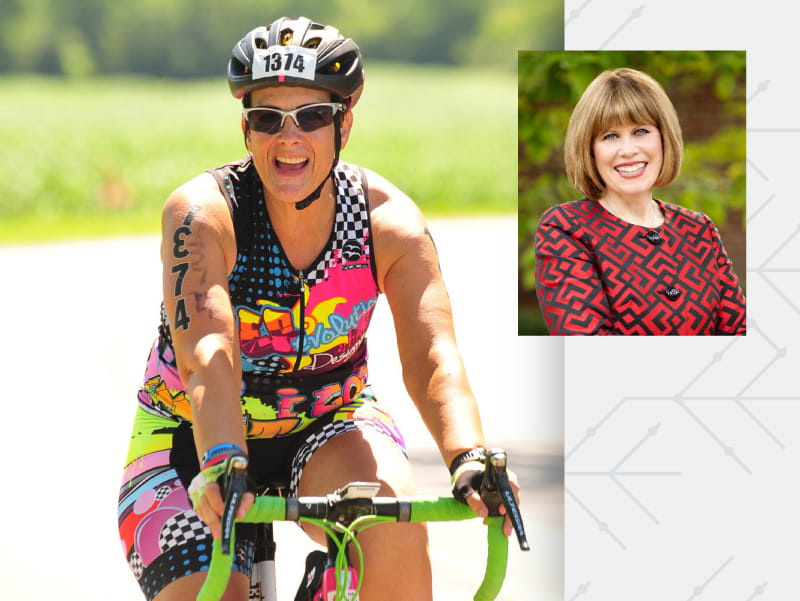 Lessons on enduring the pandemic from an Oklahoma City bombing survivor Her parents taught her grit, caring for others. She's using those traits to fight heart disease.