The football teams taking the field on Thanksgiving will bring shrewd strategies and meticulous game plans to make sure they finish the day healthy and successful.

As we tackle one of the year's biggest feasts, should we do the same?

On the one hand, it's just one day.

"If you spend the majority of your time eating well and exercising, my general opinion on Thanksgiving is give yourself a break," said Krista Varady, professor of nutrition at the University of Illinois, Chicago. "Don't be crazy, but everybody deserves a day off."

On the other hand, Thanksgiving kicks off the holiday eating season, which can have significant ramifications on body weight – and health – for the entire year.

"Between Thanksgiving and January 1, it's not uncommon to see a 10-pound weight gain if an individual is not careful," said registered dietitian Linda Van Horn, a professor of preventive medicine at Northwestern University's Feinberg School of Medicine in Chicago. "We need to recognize the risks and be thoughtful."

The Calorie Control Council, a food and beverage industry group, calculates one Thanksgiving meal can total 4,500 calories. That's more than twice the recommended number of 1,600 to 2,400 calories per day for a woman.

A 2016 study in the New England Journal of Medicine reported that the average American gains 1.3 pounds during the holiday season, while a 2000 study in Nutrition Reviews concluded that what's packed on during the holidays accounts for half of weight gain for the year.

"Even if the average weight gain is only a kilogram (2.2 pounds) each year, over a lifetime it adds up," said Surabhi Bhutani, assistant professor in the School of Exercise and Nutritional Sciences at San Diego State University, who studies holiday eating habits.

This year may not be typical, as the coronavirus pandemic disrupts the usual stream of holiday gatherings and office parties. But the lessons for curbing the dietary impact of Thanksgiving dinner remain the same. Here are some tips:

Prepare. "In the weeks leading up to the holidays, be a bit more vigilant about your food intake," Varady said. "Maybe lose a couple pounds so you'll wind up with a net zero after the holidays."

Tweak recipes. "You can treat yourself to special foods but also have control over how they're made," Van Horn said. Search the internet for a healthier version of a favorite recipe or a substitute for an unhealthy ingredient.

There's no quick fix for overeating. You can't exercise your way out of gorging at the holiday table, Varady said. "Exercise is great, but it's really more about eating less food. It's calories in, calories out."

Don't come hungry. Have a healthy breakfast or lunch, Bhutani said. "Some people try to avoid weight gain by eating very little before the big feast or a party, but that ends up backfiring because they're so hungry they're not able to control themselves."

It's not just about eating. Alcohol has calories too, Van Horn said. "And the more you drink, the less you care – not just about the alcohol but the rest of the meal as well."

Pace yourself. "It takes time for the brain to realize you're getting full," Bhutani said. "Eating slowly and waiting a few minutes before you go for seconds or thirds can be very helpful."

Beware of leftovers. The holiday table may be full of the most calorically dense foods people eat all year, Van Horn said. "If there's more left over, you may be the one suffering the consequences. Sooner or later, those pumpkin pies do get eaten."

As sound as the advice may be, Bhutani said, the culinary temptations this time of year are hard to resist.

"Holiday season can be the time when people just let go," she said. "When there are so many food cues and so much exposure to high-caloric foods, it's very difficult unless people are really determined and given some support. But we have to try." 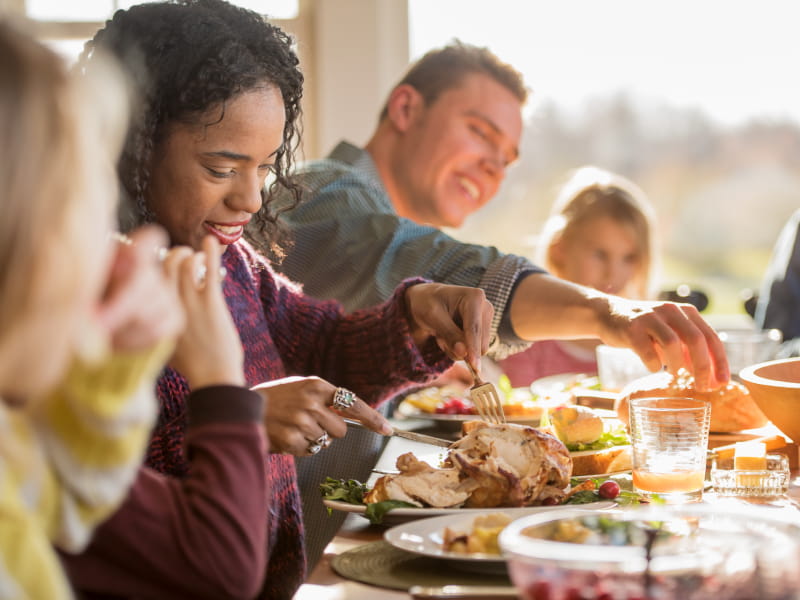 Eating mindfully through the holidays – and all year 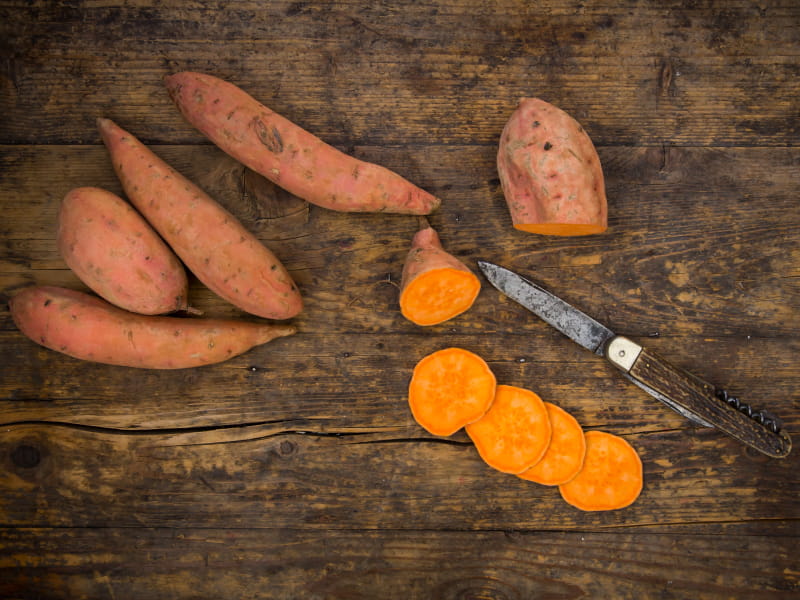 Sweet potatoes are a holiday dish to be thankful for