As he and two friends walked through their Bronx, New York, neighborhood after school last fall, they saw a man lying on the ground surrounded by a crowd of people.

Compres, a high school senior at the time, noticed the man wasn’t breathing. His heart had stopped.

Two weeks earlier, Compres had learned CPR in health class. With the training fresh in his mind, he performed chest compressions until an ambulance arrived.

“I was nervous at first,” said Compres, 20, who graduated in the spring from International Community High School in the Bronx. “But I learned how to do CPR, and I wanted to try.”

Each year nationwide, more than 350,000 people suffer a cardiac arrest outside of a hospital; only about 10 percent survive.

When the heart stops beating, a lack of oxygenated blood can cause death within minutes. If CPR is performed immediately, it can keep blood flowing to the brain and other vital organs, doubling or tripling a person’s chance of survival.

Compres is among the thousands of New York public high school students who’ve learned CPR under a 2015 state mandate. 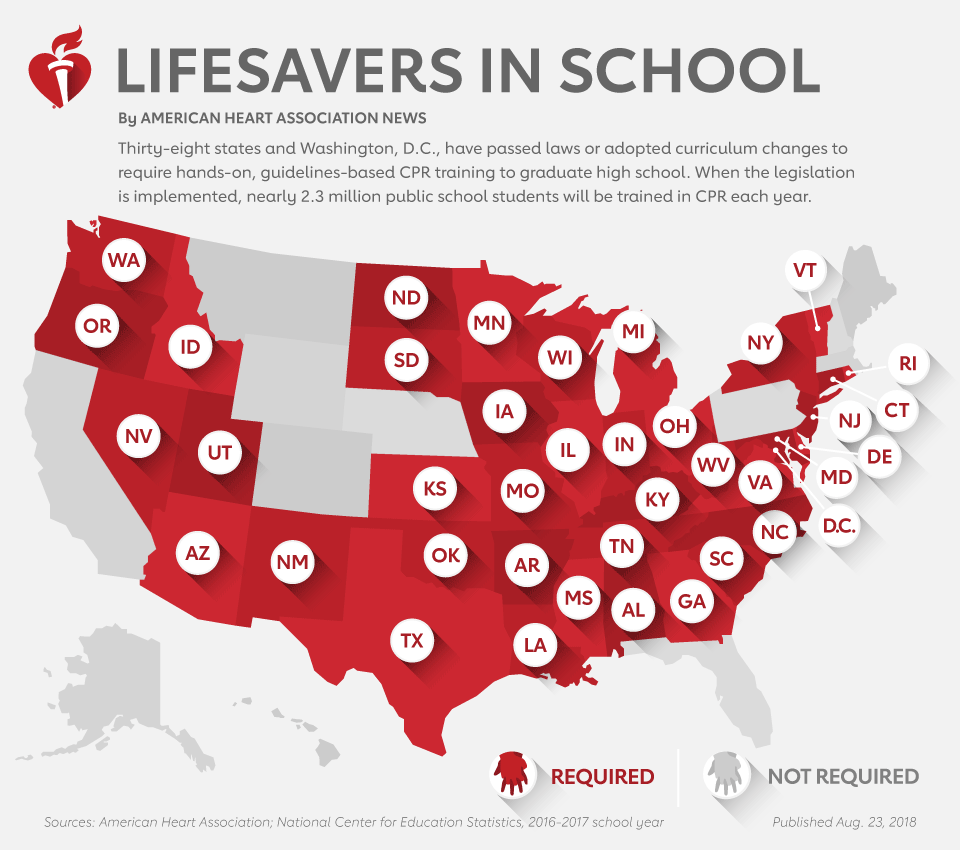 Overall, 38 states plus Washington, D.C., have passed laws or adopted curriculum requiring hands-on, guidelines-based CPR training for students to graduate high school. Kansas was the latest – and only – state to enact such legislation in 2017 to take effect this school year.

Despite steady progress, less than half of people who experience an out-of-hospital cardiac arrest receive CPR from a bystander.

“CPR is our most lifesaving treatment for cardiac arrest, but most people don’t receive it,” said Dr. Ben Bobrow, medical director of the Arizona Department of Health Services’ Bureau of EMS and Trauma System in Phoenix. “What we know is that communities with the highest cardiac arrest survival rates also have the highest (bystander) CPR rates.”

There’s “no single magic bullet” to raise CPR rates, he said, but training young people is a great place to start because they can disseminate CPR training to others, including their families. Arizona’s CPR in schools law, passed in 2016, takes effect in the 2019-2020 school year for the state’s 60,000 graduating students.

“The more comfortable people are doing this, the better outcomes will be,” said Amanda Bates, conference and education director for the Wisconsin EMS Association. She hopes the training will bump up the state’s bystander CPR rate, which is a low 19 percent.

Wisconsin and some other states also require students to learn how to use an automated external defibrillator, a portable device that can shock the heart back to a normal rhythm.

Among states that don’t require CPR training in school, some simply recommend training and others have introduced bills that failed. California, Maine and Montana have laws, but they fall short of criteria set by the American Heart Association.

Massachusetts and Pennsylvania have CPR in schools bills pending for the second straight year. Neither bill was voted on during the regular legislative session, but both still have a chance later this year.

A key to success is to provide flexibility, guidance and funding options for CPR school programs, Bobrow said. Arizona gave its schools options on how to train students and how to implement and fund training.

In the Bronx, the AHA donated equipment to the International Community High School that’s been crucial in training over 1,000 students so far, said physical education and health teacher Oswaldo Dela Cruz. He’s proud of Compres, the first of his students that he’s aware of to use CPR in a real-life situation.

“I was really happy that some other teachers might see it and be inspired by that situation to teach CPR,” Dela Cruz said.

Compres added, “It demonstrates how important that class is.”