Paul Dudley White (June 6, 1886 – October 31, 1973), graduated Harvard College and Harvard Medical School, and eventually rose to the position of Chief of the Cardiac Services at the Massachusetts General Hospital. He is widely regarded as the founder of preventive cardiology. White was a staunch advocate of the belief that lifestyle affected coronary artery disease. In keeping with his beliefs, he was a vigorous walker and bicycle rider. He was appointed as President Dwight D. Eisenhower's cardiologist following his heart attack in 1955, and played an important role in his recovery and his subsequent running for a second presidential term of office.

Dr. White helped found the Boston Society for the Prevention and Relief of Heart Disease (now the Greater Boston Division of the American Heart Association). He joined forces with similar groups in New York City and Philadelphia, and in 1924, became one of the founders of the American Heart Association. He served as AHA president in 1941. He was the chief consultant to the National Heart Institute from 1948 to 1955 and played a major role in the establishment of the Framingham Heart Study, which was the first major epidemiologic work to identify risk factors in coronary artery disease. He was also influential in the American Red Cross, and in establishing the National Institutes of Health.

White was recognized as a superb teacher and compassionate bedside physician. He published twelve books and more than 700 scientific articles. His most noted textbook, Heart Disease, was first published in 1931 and became a classic in the field. His interest in the electrophysiology of the heart would eventually pair him with Drs. Louis Wolff and John Parkinson, who together described the Wolff-Parkinson-White syndrome.

On September 14, 1964, President Johnson presented Dr. White with the Presidential Medal of Freedom. In his later years, White continued to travel and to speak about heart disease and, increasingly, about his concern for world peace. Dr. White is appropriately remembered in the Paul Dudley White Bicycle Paths that line the Charles River in Boston, where people walk, cycle, jog and play; and in doing so, celebrate his legacy of building healthier lives free of cardiovascular disease and stroke. 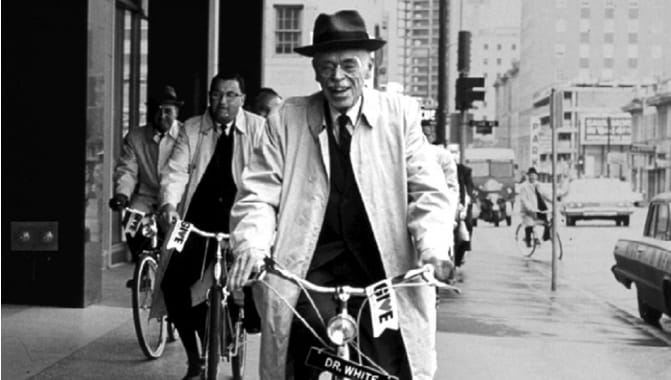