Six months after Rachel and Levi Strauss married on the coldest Valentine's Day in Detroit history, they learned they were going to have a baby.

At their home in Houston, Levi helped satisfy Rachel's cravings for milkshakes, chips and queso, and mega-stuffed cookies.

At Rachel's 20-week anatomy scan, the couple held hands and smiled as the technician pointed out their son's 10 tiny fingers and toes. The baby had a healthy brain and kidneys.

Then the technician saw his heart. She fell silent. She left the room to get Rachel's doctor.

The doctor told them something didn't look quite right with their son's heart. A fetal echocardiogram was needed to determine the problem. But it was a Friday. The couple had to wait through the weekend to get the test done.

Early the next week, a technician performed the three-hour test. A few days later, Rachel and Levi, who both work in insurance, were in their individual offices steps away from each other when Rachel's doctor called.

She told the couple the baby had a heart defect. Levi's hands started to shake and they both began to cry. She suggested they transfer to a nearby children's hospital where there were specialists who could help, and get another fetal echocardiogram.

That weekend Levi had planned a birthday party for Rachel at their house. He lined up a grilled cheese food truck for guests. Rachel wanted to cancel.

Because it was close to Valentine's Day, Levi planned a heart décor. They stuck with it. They also put on a brave face. Not ready to share their news, the couple did their best to enjoy the event with friends and family.

The next week, they had the second echo. Their new doctor brought them into what Levi calls "the crying room." The doctor told them their son had a congenital heart defect called tetralogy of Fallot. His abnormal heart structure was causing oxygen-poor blood to leave his heart and flow around his body. He also had pulmonary atresia. That's when the valve in charge of controlling blood flow from the heart to the lungs doesn't form.

He would likely be born blue, the doctor said, and need open-heart surgery shortly after birth. Rachel and Levi held each other and cried. They bought a big comfortable couch and stayed home from work for a week binging TV shows.

"I started bawling in the back of Best Buy," Rachel said. "Then," Levi added, "we did our research."

In the following days, they learned more about the condition and found a cardiologist and surgeon they felt comfortable with. "I remember thinking, if Rachel and I can get through this, we can get through anything," Levi said.

The couple knew that because of the baby's heart problem, Rachel would have to be induced. They filled the delivery room with friends and family and made custom T-shirts for everyone with a picture of a heart on it. Nurses wore the shirts, too.

Leo Elijah Strauss was born pink, not blue, and he was named after Levi's grandfather, who's a Holocaust survivor. Leo's name in Hebrew, Lev, means heart. Rachel and Levi held Leo before he was whisked off to the neonatal intensive care unit where he spent the next 23 days.

They gave him a blanket they'd slept with before the birth and a stuffed lion they named Frasier after Leo's surgeon.

On his 23rd day of life, Leo underwent a surgery that lasted nearly nine hours. It widened the passageway between his right ventricle and pulmonary artery to improve blood flow to his lungs. After surgery, he was hooked up to wires and cords. He had to eat through a feeding tube. Ten days later, Rachel and Levi took him home.

Now, Leo is 5 and loves playing with Legos. He wants to be a police officer and a dad when he grows up. He loves playing with his little sister, Goldie, 4, whose Hebrew name, Neshemah, means soul. (When they became pregnant again, Rachel and Levi were nervous their daughter also would have a heart problem, but doctors said the odds were low.)

Leo sees his cardiologist once a year and may need another surgery to repair or replace valves in his heart.

"Leo is the most amazing individual," Levi said. "I'm so honored to know him. He's kind, sweet, intelligent, loving, caring and brilliant."

Rachel wishes she'd have known how common heart defects are in babies when she was pregnant. They affect about 1 in 100 births in the U.S. each year. "But at the time, we felt like we were 1 in 3 trillion," she said.

Now, she and Levi are dedicated to educating and supporting other parents. Every few months someone who knows their story asks if they can talk to a friend or family member whose baby has a heart defect. They readily agree.

Levi has volunteered at the hospital where Leo had his surgery, teaching a class for parents of newly diagnosed children. "Our goal is to be there for other parents," he said. "Find support, stay off Google, and know that a heart defect isn't something that will prevent your child from being the person they're going to be." 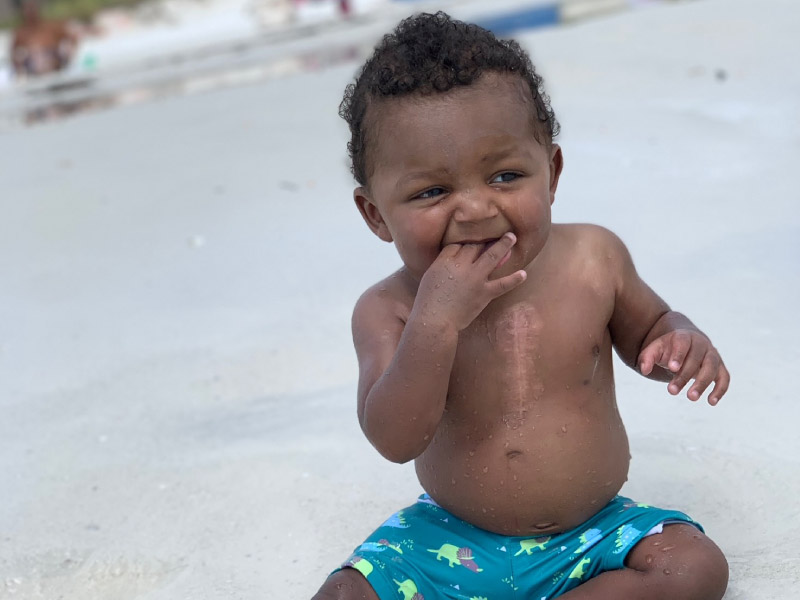 Diagnosed with a heart defect in the womb, baby had two heart surgeries and then got COVID-19