Julie Stillman was 55 years old when a blood vessel in her brain suddenly burst. The hemorrhagic stroke left her unable to compose a simple sentence – a hard blow for a woman who built a career in book publishing.

Now 69, Stillman is one of several dozen stroke and brain injury survivors who lift their voices in joy as part of the Aphasia Choir of Vermont. There are a handful of such choirs springing up around the world, giving stroke survivors and people living with dementia or other brain injuries a chance to tap into one of the few means of communication left to them.

"To hear that clarity and volume, it's like magic," said Stillman's husband, Jeff Nagle, whose last fluid conversation with his wife took place 14 years ago on the phone, an hour before he found her on the floor of their home. "It's amazing to see this happen."

Roughly one-third of people who survive strokes have aphasia, a speech disorder that makes it difficult to express or understand language resulting from damage done to the brain. But scientists have long known that even when people with certain types of aphasia lose the ability to speak, they often are able to sing, a phenomenon attributed to the different regions of the brain responsible for producing music and language.

Studies of this phenomenon and of how music affects the brain have led to the development of a variety of music-supported therapies, such as melodic intonation therapy, which trains stroke survivors to communicate rhythmically to build stronger connections between brain regions. Other therapies focus on listening to music or teaching people to play musical instruments, such as the keyboard or drums.

A growing body of research shows these types of therapies can play an important role in helping stroke survivors heal.

As early as 2008, researchers published work in the journal Brain that showed just listening to music for an hour each day improved memory and attention, as well as mood, during the early stages of stroke recovery. A follow-up to that study in 2014 provided insights as to how and why: Listening to music stimulated structural changes in the areas of the brain responsible for verbal memory, language skills and focused attention. Digging deeper, investigators were able to show vocal music was superior to instrumental music or listening to audiobooks in stimulating the brain changes that led to memory and language recovery.

"When we would evaluate people with stroke or speech impairment, we always checked their ability to sing," said Leary, who also is a singer and songwriter.

Stillman and Nagle were among the first to join when Leary launched the choir in 2014, with just 11 stroke survivors and their spouses and caregivers. Since then, the group has more than doubled in size. She recruits through stroke support groups and the University of Vermont, which has a speech and language pathology program and an outpatient clinic.

Much to her surprise, the choir quickly turned into something much bigger than an opportunity for people to express themselves through song. It helped establish a community for people who had become socially isolated because of their condition. "They lose friendships, sometimes spouses," Leary said. "It's very lonely."

But through the choir, they find others who understand what they're going through. "The shared experience, that's the big thing," she said. "I've seen some very, very depressed individuals absolutely find themselves again and blossom."

"The choir has been a wonderful support group in a different way than what we had in speech therapy," said Nagle. "We've made a lot of friends."

And through those friendships, they've expanded Stillman's ability to resume some of her old hobbies, such as a love of boating. Another choir member introduced them to an adaptive kayaking group in which stroke survivors and others with physical disabilities use special equipment that allows them to paddle with one arm. They are now active participants in both groups, enjoying a social life they never thought they'd see again.

Nagle also believes his wife's language abilities improve during choir season, which lasts from March until June, when it culminates with a free public concert.

Researchers like Pablo Ripollés say it's possible the daily music engagement is making a difference. As an assistant professor of psychology and associate director of New York University's Music and Audio Research Laboratory in New York City, Ripollés was one of a group of investigators who identified how listening to music changes brain structure in stroke survivors.

Scientists know providing a rich environment can stimulate the brain and promote healing following a stroke, Ripollés said. His research has focused on using music to provide that enrichment, especially during the early stages of recovery when people are limited in what they can do.

"There is one thing you can do for those patients, even when they are in bed," he said. "Maybe they cannot move very well, but you can provide an enriched environment by having them listen to music."

Music therapy's benefits can vary, and how much damage a stroke has caused to the brain affects how well it can recover. "We have good evidence that music therapy works in people who have not had catastrophic brain injuries," Ripollés said. "Maybe a major one, but not a catastrophic one."

More research is needed to see if music therapy can be more effective than traditional speech therapies, he said. But in the meantime, stroke survivors can listen to their favorite music or join a choir, if one is available in their area.

"This is something you can do on your own and for free," Ripollés said. "It's not going to harm you, and it might do you some good."

Stroke survivor never lost fluency in the language of dance, art and song 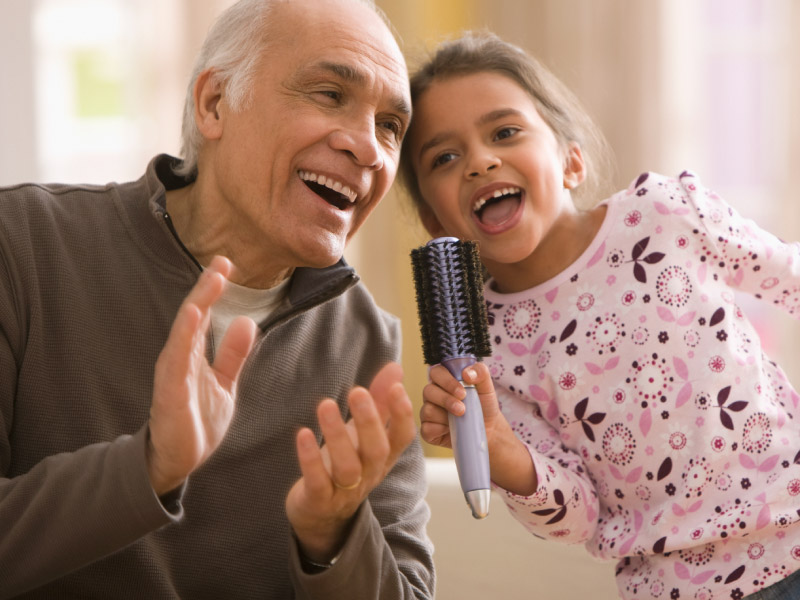 Carrying a tune could lead to better health

When a stroke limited college professor's voice, he turned to writing