Every weeknight in April, Charley Bednarsh flung open the windows of her fifth-floor apartment across from the World Trade Center. At 7 p.m., she'd lean out, bang a metal spoon against a pan and shout with joy as part of the chorus of New Yorkers saluting health care workers fighting the coronavirus.

With the kids below cranking their noisemakers, another neighbor blowing his trumpet and car horns honking, it got pretty loud inside Bednarsh's home. Yet her 85-pound, caramel-colored, floppy-eared Labradoodle named Atticus hardly stirred.

Around the middle of April, though, something began setting off Atticus during the serenity of the early morning hours. Nearly every night, he howled until she woke up.

Looking back, she realizes it was a sign – one of many she missed.

Bednarsh was having a heart attack. Not only did she fail to recognize it, she refused to seek help from 911 or an emergency room because of the pandemic.

"I'm an intelligent person, but with this I wasn't too smart," said Bednarsh, the director of children's services at the New York City Family Justice Center in Brooklyn. "I realize how ridiculous I was. It's embarrassing."

During the pandemic, hospitals have reported an alarming dip in patients treated for heart disease and stroke. With those being the top two causes of death worldwide, it's unlikely fewer people are experiencing them. It's far more likely people are avoiding hospitals, perhaps because they fear catching the coronavirus there or, like Bednarsh, because they don't want to burden already overburdened health care workers.

Doctors are urging patients to make sure they get the care they need. While their message carries the weight of authority, there's also something to be said about hearing it from a patient. That's why Bednarsh is sharing her story and her message: Learn from my mistakes.

For weeks, she had a hacking cough and pale complexion. Her colleagues insisted that she see a doctor, for their sake if not hers.

She finally went. The diagnosis: pneumonia. That was in December.

By mid-February, she felt better but still not great. Then her back started hurting. The pain kept getting worse. Once the lockdown hit, Bednarsh turned to Google for medical advice.

She convinced herself that instead of pneumonia, she'd been an early victim of COVID-19. She theorized the backache was a ruptured disk or bruised ribs from coughing.

She toughed it out while continuing her work.

Many people she spoke to were struggling with unemployment, fear and grief. One woman told Bednarsh the virus claimed 13 people at her church. Another woman lost 12 friends. She thought about those conversations every time she heard an ambulance siren or a grim report on the news.

"Nothing I'm experiencing is that bad," Bednarsh told herself. "There are really sick people out there – and I'm not one of them."

Meanwhile, Atticus needed to be walked.

Atticus is no ordinary dog.

A registered therapy animal, he works with Bednarsh to comfort children who've witnessed and/or been victims of domestic and gender-based violence, including human trafficking victims who have been enslaved and endured unimaginable atrocities.

He's also such a lovable goofball that he's been featured in TV commercials.

Pre-pandemic, Bednarsh walked Atticus for a mile or two around her neighborhood each day. She loved strolling a few blocks to the waterfront and getting a glimpse at the Statue of Liberty. He loved being outdoors and around people.

By April, Bednarsh was so uncomfortable that walks with Atticus lasted only a few blocks.

So when he began howling at night, she chalked it up to him being lonely and needing more exercise.

Then came the early morning when Bednarsh found herself on the ground, Atticus barking in her ear. She'd rolled out of bed and was gasping for air.

A few days later, she took Atticus for a walk and needed to stop and catch her breath every few steps.

Clinging to her self-diagnoses, she figured COVID-19 had ruined her for good.

"I was actually starting to get depressed," she said.

When she heard that coronavirus antibody tests were becoming easier to find, she urgently wanted one. She messaged a doctor seeking a referral.

The doctor she contacted happened to be a cardiologist.

Reynolds treats Bednarsh for high blood pressure and an irregular heartbeat. Her direct, non-judgmental, collaborative approach – plus her humility and empathy – remind Bednarsh of the best crisis counselors.

In Bednarsh's message to Reynolds, she described the shortness of breath and back pain. She reminded Reynolds about her recent bout with pneumonia and suggested it might've been COVID-19. That's why she wanted help getting an antibody test.

The words "shortness of breath" and "back pain" were enough for Reynolds to start dialing Bednarsh's cell.

Although Reynolds immediately suspected a heart problem, she treaded lightly, befitting the demeanor that made Bednarsh so fond of her.

She persuaded Bednarsh to visit a nearby clinic. Imaging results prompted another chat with Reynolds.

She urged Bednarsh to get to the emergency room.

"People are dying there," Bednarsh told Reynolds. "It's just not a good place for me."

Again, Bednarsh's reluctance was rooted in her refusal to siphon care from COVID-19 patients. She wasn't afraid of catching the coronavirus because she believed she'd already had it.

Meeting in Reynolds' office the next morning, Bednarsh said her back pain had spread to both shoulders.

"You're having a heart attack," Reynolds said.

From working with trauma victims, Bednarsh knew she needed an advocate to take over her part of this conversation. She chose her oldest son, Jon. Reynolds called and explained everything to him.

Hours later, Bednarsh was in the recovery room at NYU Langone. A stent had been inserted via catheterization to restore blood flowing into a major heart artery called the left anterior descending artery.

She never felt like her care was compromised because of how busy everyone was.

"I thought it was going to be really scary," she said. "It wasn't. It was exceptional from start to finish."

That's not to say it was business as usual.

Her temperature was taken more often than previous hospital stays. She answered more questions. Everyone wore respirator masks, some with face shields. Staffers told her about their fears and pressures.

But they also shared some laughs and spent time getting to know each other.

"One of the nurses was engaged," Bednarsh said. "She takes out her phone – it's got plastic all over it – and she's showing me her pictures of her wedding dress. It made my day."

In addition to seeing patients, Reynolds is director of the Sarah Ross Soter Center for Women's Cardiovascular Research at NYU Langone and associate professor at NYU Grossman School of Medicine.

It was her idea for Bednarsh to share her story.

"She's not the only person with heart pain I've told to go to the ER who declined," Reynolds said. "I don't know yet of anyone else who's suffered a heart attack and toughed it out at home, but I worry there are more. Some people think a heart attack has to feel so terrible that it would be impossible to ignore. I want to get that out of people's minds."

Pandemic aside, Bednarsh's story also helps set the record straight in other areas:

– Heart attacks don't happen only to men. In fact, heart disease is the No. 1 killer of women, claiming more lives each year than all forms of cancer combined.

– Heart attack symptoms can vary. They don't always play out like Hollywood portrays them.

"My vision of a heart attack was a man clutching his chest as he admits to a crime or tells someone he loves them," Bednarsh said. "You never see a woman dying from a heart attack on TV."

Women also are more likely than men to delay seeking treatment. Bednarsh is now one of them. It's tough to prioritize your breathing problems, she said, when you work with kids who are victims of domestic violence and human trafficking. It's also part of the nurturing instinct she's honed as the mother of two and grandmother of three. The pandemic added some obstacles Bednarsh could only see in retrospect.

Had she been going to work, her colleagues likely would've encouraged her to see a doctor sooner, as they did in December.

Had she been dog-walking with her usual groups, or hanging out with family and friends, someone may have recognized her warning signs.

"I was very lucky that I didn't die," she said.

Bednarsh has been breathing freely since waking in the recovery room.

The day she arrived home, she found herself constantly thinking, "I can breathe!"

A few weeks later, her health continues ramping up. Her depression is gone. She's sleeping better, too.

"Atticus totally stopped bothering me at night," she said.

There was one last loose end: An antibody test. She finally took it the second week of May.

It came back negative. 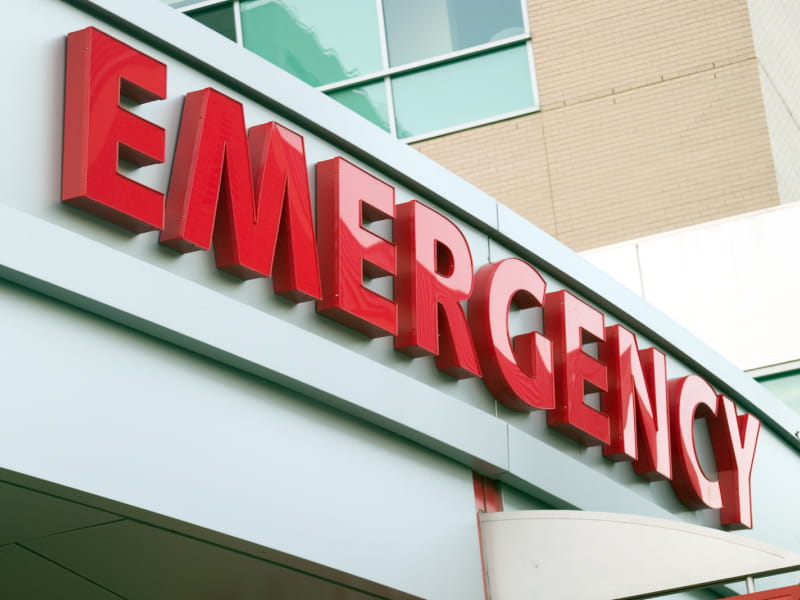 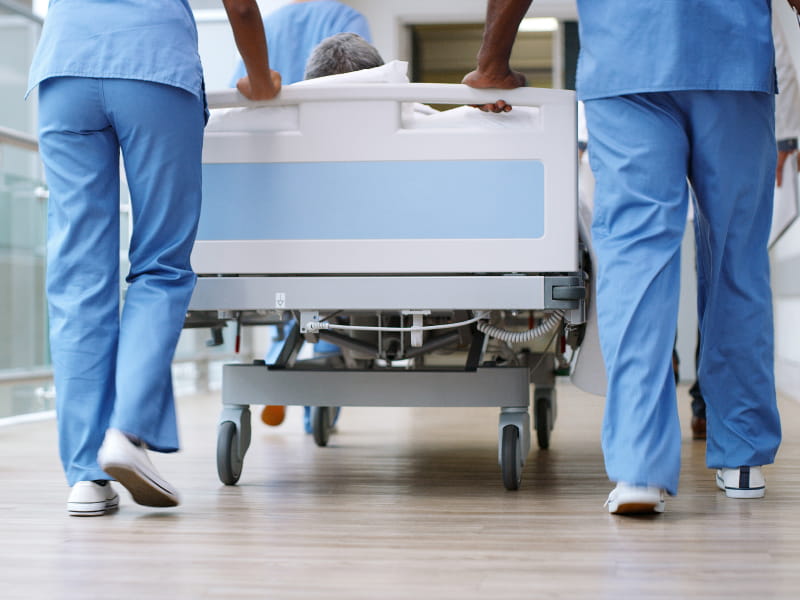 Is it safe to go to the hospital during COVID-19 pandemic? Doctors say yes