At the Montgomery Regency Trailer Park, kids often gather before the 10:30 a.m. arrival of the Brown Bag Bus. It's a race to be first to greet their buddy behind the wheel, James Amos.

"Mr. Amos" knows by name most of the 600-plus kids on his route. He knows their houses, too. So if it's time for him to leave and they haven't visited yet, he honks the horn to get their attention.

Before the pandemic, Amos eagerly slapped hands and chatted with his little buddies. Now, stuck on the bus and behind a mask, he does his best to greet them and look after them like the caring 71-year-old grandfather he is.

"When I see them come out with no shoes on, I tell them, 'Where are your shoes? You're going to get sick,'" he said. "The next day, they come out with shoes on."

Yet for all the mutual affection, Amos knows the real reason children get so excited to see him and his bus.

"If school's not in, we're the only meal they're getting," he said.

The Brown Bag Bus is the brainchild of Gary Cobbs, the president and CEO of the YMCA of Greater Montgomery in Alabama. Seeking a way to feed kids who couldn't get to the Y or other facilities, Cobbs and team launched this program in January 2017 to bring them meals.

They transformed a former school bus so 29 kids can sit around tables and eat meals together. The setting also allows for lessons on making and eating healthy meals. A typical brown bag includes a sandwich, milk and fruit and/or vegetables.

Before the pandemic, Amos visited two or three sites after school on Mondays through Fridays, plus some Saturdays. He had a heavier schedule during the summer.

"Now, we've had to pretty much have the bus go all day," Cobbs said.

From 10:30 a.m. to 3 p.m. Mondays through Saturdays, Amos makes 14 stops. He has a police escort to help stay on schedule. YMCA staffers wearing gloves and masks hand out the brown bags, with officers keeping everyone 6 feet apart.

In addition to the bus, the Y sends vans to eight other spots in Montgomery. "Operation Brown Bag" has expanded to Huntsville. All told, more than 10,000 meals per week are going out this way.

The kids are getting more than a meal, though. "Mr. Amos" also is handing out a dose of normalcy during this unusual time.

"He is that consistency that our children need for good mental health," said Connie Dacus, who volunteers several days a week to help prepare the meals. "He's sort of like a gentle giant. He's quiet, but once he gets around those children, that smile of his just melts everyone's heart."

Amos spent 20 years in the military and the next 25 driving city buses in Los Angeles. His mother-in-law lived in Alabama and he said he set his mind on retiring there for two reasons: "The cost of living and no traffic."

He arrived in Montgomery in 2006 and put off collecting Social Security for a bit. He drove a city bus for two years, then spent three years as a supervisor. He finally retired in 2011, then put his commercial driver's license to use as a volunteer for the YMCA.

When the Brown Bag Bus launched, Amos was pleasantly surprised to be asked to drive it.

"They said my dedication and stuff got me nominated," he said. "I just enjoy being around the kids."

The joy he shares with the children isn't all that keeps Amos feeling young.

Knowing that long days of sitting aren't good for a body, he lifts weights and jogs. He also loves fishing.

"I'm in pretty good shape for a 71-year-old man," he said. "No diabetes or none of that stuff. My cholesterol is good, and my blood pressure is good. A lot people say I don't look 71."

He shrugged off the fact his age put him at higher risk of complications should he catch the coronavirus and develop COVID-19, and he gladly volunteered for the added workload during the pandemic. He also has the support of his wife, son, daughter and eight grandchildren.

"They know that this is something I like doing," he said. "My wife says, 'You going to ever stop?' I don't think so. I'll probably stay with the Y for life."

Amos' son has four girls, and his daughter has four boys. The granddaughters live nearby. The grandsons are living with Amos and his wife because their mom is deployed overseas in the Air Force.

As much as he enjoys spending time with his eight grandkids, looking out for his hundreds of surrogate grandkids is rewarding, too.

"I blow the horn and those little bitty kids come running up, reaching out with their hands," Amos said. "You can look at them and tell they haven't had anything to eat that morning. It makes me feel good that I can bring the food to them. That way I know at least they ate something for that day." Meet some of the people feeding Americans during the pandemic 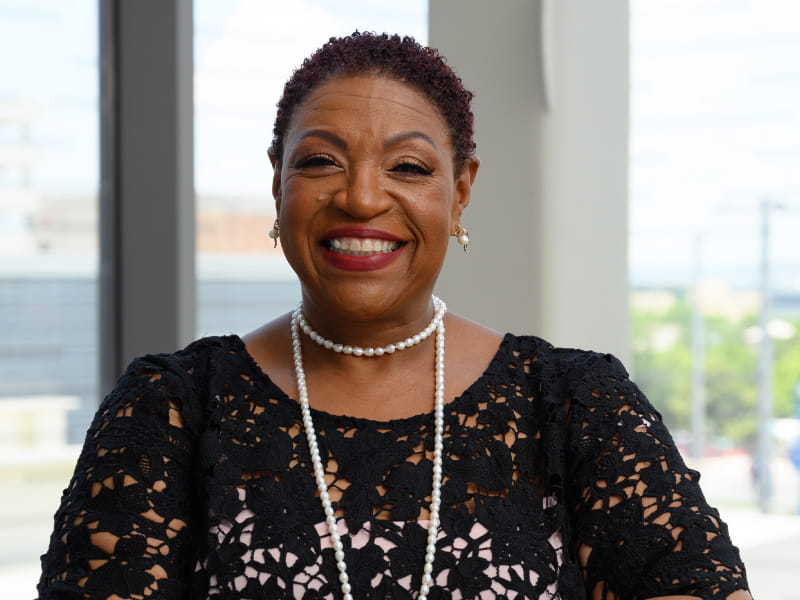