Home monitoring also can confirm a high blood pressure diagnosis, although less research supports it, according to the task force report.

There has been a fair amount of interest about supplementing office measurements, the “gold standard for making treatment decisions,” with out-of-office measurements, said Paul Whelton, M.D., chair of a writing group currently developing joint high blood pressure guidelines for the American Heart Association, American College of Cardiology and other health organizations.

Secondary confirmation of high blood pressure is useful because caffeine, nicotine, emotions, stress, pain and physical activity can affect it short-term, according to the USPSTF report.

Ambulatory monitoring better measures blood pressure and therefore better predicts the risk of heart disease or stroke than office measurement alone, according to the AHA. It’s also useful for diagnosing “white-coat hypertension,” high blood pressure appearing only at the doctor’s office when medical professionals are present.

Approximately 15 percent to 30 percent of people have white coat hypertension, according to the USPSTF, which can lead to the overtreatment of high blood pressure.  The task force reported “significantly fewer patients requiring treatment” based on ambulatory monitoring.

People with white coat hypertension are at increased risk for developing sustained hypertension, he said.

“On the other hand, missing masked hypertension is a serious issue, because those people are already at increased risk for cardiovascular disease and we need to grapple with it,” he said.

“Masked hypertension,” occurs when someone’s blood pressure is normal at a medical office but elevated at work or home.

According to the AHA, about 80 million U.S. adults have high blood pressure, a reading of 140/90 millimeters of mercury or higher, but nearly 20 percent are unaware of it. Uncontrolled high blood pressure raises the risk of stroke, heart attack or heart failure. Lower blood pressure is strongly associated with less of these serious complications.

“One out of three adults in the United States has high blood pressure,” said Eduardo Sanchez, M.D., M.P.H., the AHA’s chief medical officer for prevention. “Half of them don’t have it under control. One more thing, the likelihood of high blood pressure increases as people age.”

There are challenges with ambulatory blood pressure monitoring, said Whelton. “When you get into the real world, not every practitioner can do ambulatory, or has familiarity with interpretation of the results.  It’s also a nuisance to have to wear something for 24 hours.  Finally, it’s relatively expensive.”

He said it’s much easier to encourage a patient to take home blood pressure readings, or go to a drugstore to get it measured.

The USPSTF acknowledged that ambulatory blood pressure monitoring can be problematic and that it, along with office and home monitoring should be carefully interpreted for each patient. The task force also recommended immediate treatment of very high blood pressure or for patients showing signs of major organ damage.

Despite its limitations, Whelton said it’s never a bad idea to measure blood pressure at a healthcare provider’s office, adding that a single set of observations should never designate high blood pressure.

Editor’s Note: This story was written when high blood pressure was considered 140/90 or higher. New guidelines released in November 2017 changed the definition to 130/80. 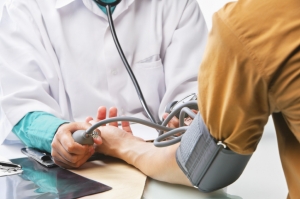