Heart disease death rates have increased for the first time in decades and stroke death rates also have gone up, according to new federal statistics(link opens in new window) that show a drop in U.S. life expectancy.

While there is no obvious explanation for the small jump in these death rates published Thursday by the Centers for Disease Control and Prevention, American Heart Association President Steven Houser, Ph.D., said they reinforce the urgency of preventing heart disease and stroke – the two leading causes of death in the world.

“We know the risk factors of cardiovascular disease. We have to continue to help people understand them so they can take control of their own health,” said Houser, senior associate dean of research, chairperson of the Department of Physiology and director of the Cardiovascular Research Center at Temple University in Philadelphia.

The CDC found that death rates from eight of the top 10 causes of death in the U.S. went up in 2015 and the average life expectancy fell to 78.8 years, which is a decrease of one-tenth of a year or slightly more than a month from 2014.

“It is unusual,” said Jiaquan Xu, M.D., co-author of the report and an epidemiologist at the National Center for Health Statistics at the CDC. He cautioned against reading too much into the statistics since they only represent one year of activity. “This isn’t a trend,” he said. 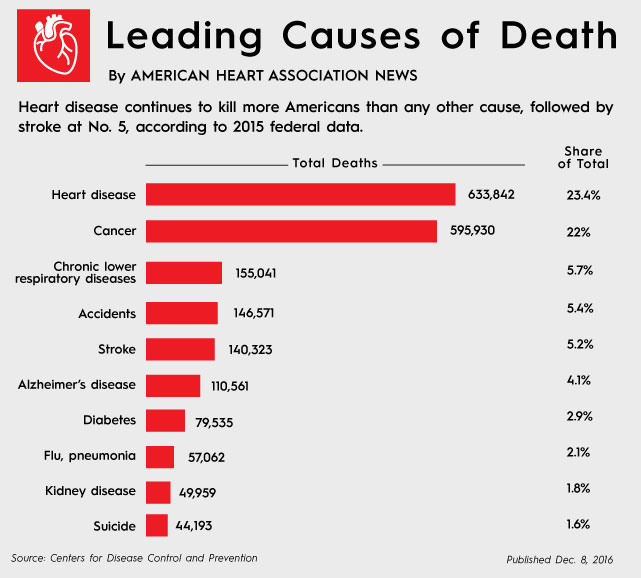 Houser noted that preliminary research suggests there won’t be another increase in 2016. Yet, he said the medical community needs to do more to help people embrace life changes such as exercising and eating a healthy diet.

“I’m worried about the young people that have obesity and early onset metabolic syndromes,” he said. “What is going to happen to them when they are 40 years old? That is my biggest concern.”

Especially troubling are current rates of childhood diabetes and obesity that could affect the future death rates due to the well-documented ties to cardiovascular diseases, health experts say.

The AHA has been engaging a number of approaches to combat these trends. Among these are efforts to reduce Americans’ intake of sugary beverages to prevent obesity and the increased risk it causes of heart disease and stroke.

Houser said improving Americans’ cardiovascular health is crucial because of the impact it could have on deaths from other diseases that are also on the upswing.

The report also showed that the death rate from Alzheimer’s disease rose 15.7 percent — the highest increase for any disease, from 25.4 in 2014 to 29.4 in 2015. Houser said cardiovascular diseases can lead to vascular dementia, and that further research may show that this is associated with Alzheimer’s disease.

There was some good news from the report. The death rate from cancer dropped from 161.2 to 158.5 deaths per 100,000 people. The rate of death from the flu and pneumonia was essentially flat.