Jansen’s warning sign was a racing heartbeat — one of the tell-tale symptoms of atrial fibrillation, or AFib, an irregular heartbeat that puts people at a much higher risk of stroke. Although AFib is more common among people over the age of 60, Kenley had key risk factors for developing AFib including high blood pressure and family history. His father - Isidro, has AFib and suffered a stroke about 16 years ago. Research shows that having a parent with AFib can strongly increase an offspring’s risk of developing this heart rhythm disorder.

Jansen’s diagnosis of the condition has inspired him to promote AFib Awareness. He encourages, “Listen to your body and don’t brush off health issues that could be career ending, or worse, life ending.”

“AFib was a curveball I didn’t see coming.”

Five years ago the right-hand pitcher was working out with teammates in preparation for a game against the Colorado Rockies later that night.

“I was doing sprinting and other conditioning, where your heart rate would go up, and I remember it was like my heart went out of whack,” Jansen said. “I didn’t say anything. I thought it [wasn’t] a big deal, and I kept going.”

Jansen went on to pitch that night, but, in the 8th inning, he started to feel tired, out of breath and his heart was still beating irregularly.

In the 9th inning, his concerns led him to ask one of the trainers to feel his heartbeat, but also tried to persuade her not to say anything. She did, however, let the other trainers know. They all watched as Jansen took to the mound in the last inning of that game. The 6-foot 5-inch, 265-pound Jansen, known for his fastball, said with every pitch, he felt like he was going to pass out.

“The training staff was waiting for me [afterwards], and they put the EKG machine on me and all that stuff. I found out that day that I had atrial fibrillation, … and it was the first time I ever had trouble with my health,” Jansen said.

Doctors treated Jansen’s first AFib episode with an electrical cardioversion, which restores regular heart rhythms by sending an electrical shock to the heart. Jansen also had to take blood thinners to reduce his stroke risk in the month after the procedure.

From the Mound to The Recovery Room And Back Again

He returned to baseball for the 2012 season feeling great. But 11 months after his first AFib episode, Jansen felt the sensation in his heart return.

“I was doing the same thing, working out, running, conditioning and my heart went out of whack, again,” he said. “This time, I knew what it was, and I said, “OK, take me to the hospital, I’m having trouble with my heart again.”

While Jansen’s heart rhythm was once more restored with cardioversion, it meant more time on blood thinners and more time away from the game of baseball.

Doctors suggested Jansen consider ablation, a procedure in which they would insert a thin catheter, or tube, into Jansen’s groin and guide it to the heart, where they would treat the specific areas in the heart causing the irregular beats in hopes of restoring normal rhythm. In October 2012, Jansen decided to have the procedure and feels that it went well. He hasn’t experienced further symptoms and he’s back to full strength on the mound.

Jansen is doing much better these days, but he doesn’t take his health for granted. His AFib diagnosis helped him become more aware of the importance of family health history.

“I’ve learned a lot about the heart” Jansen said. “I just have to be on top of my game and make sure my blood pressure stays low, because if my blood pressure gets really high or spikes that could cause another episode. High blood pressure makes the heart work harder. We should take care of our bodies, especially our hearts. You have only one.”

The Drive to Stay in The Game: Athletes with AFib

The irregular heartbeat that nearly derailed Jansen in 2011 threatened his life-long dream of playing baseball. He said that’s why he hesitated to say anything and that a lot of professional athletes may play hurt, because they’re scared of what will happen if they speak up.

He warns the reality is the consequences of not speaking up could be much worse.

“That was a very scary moment. Young athletes take stuff for granted. We need to listen to our bodies. Sometimes your body is making signals to you, and you try to avoid it. …Now I’m very aware,” Jansen said. “I feel like now, in my life, I’m playing defense with my body. My message is when you feel something like that, anything, just say something. If I hadn’t said something I could have had a stroke…. If I could go back, I would have said something right away, it’s better just to be safe.” 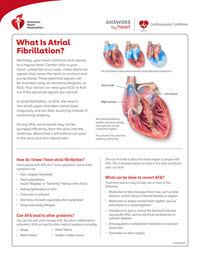 AFib Resources For Patients and Professionals