From educating people about the importance of a heart healthy lifestyle to raising awareness about heart attack and stroke warning signs, Barrett-Jackson is proud to support the AHA through Driven Hearts – a yearlong, multifaceted campaign benefiting the AHA.

Donate to fight the No. 1 and No. 5 killers of Americans Where do we
go from here?

In 2019, at Barrett-Jackson's Scottsdale auction, the 2020 Toyota Supra No.1 will be auctioned off will all proceeds going to the American Heart Association! $17 of every license plate purchase goes back to benefit the American Heart Association.

By donating to the AHA you can help fight No. 1 and No. 5 killers of Americans – heart disease and stroke.

Knowing the warning signs of heart attack and stroke is the first step to a longer life.

Through a yearlong campaign, Driven Hearts has raised an incredible amount of awareness and funds to help the AHA.

Find out what inspired the Driven Hearts initiative, where we've been and where we're going.

The car collector community is
slamming the brakes
on heart disease and stroke.

The signs of a heart attack include:

Symptoms vary between men and women, please don't hesitate and call 911 if you're experiencing symptoms.

Learn the warning signs of a heart attack

The warning signs of a stroke include:

Learn the F.A.S.T. signs and symptoms 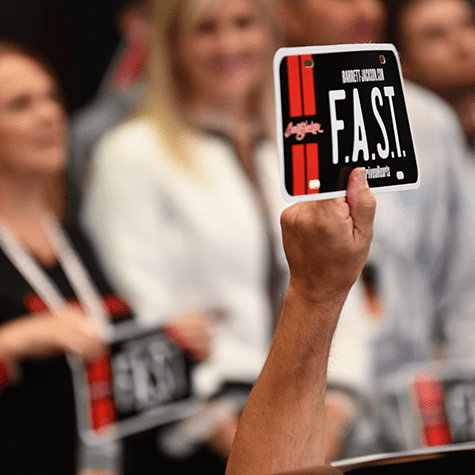 As the 2018 Phoenix Heart Ball Chair, Carolyn Jackson has set out to make a difference in the lives of many through her Driven Hearts initiative. Backed by the generous support of the collector car community and Barrett-Jackson’s first ever yearlong charity initiative, as well as contributions from local Scottsdale community leaders, Driven Hearts is making history. Contributions received go far in supporting cardiovascular research, professional and community education, and advocacy efforts “We’ve lost a number of beloved members of the collector car community to heart issues,”

says Barrett-Jackson CEO Craig Jackson. “We still feel the loss of Greg Mauzy, and we just recently lost Dave Ressler. Both of these men exemplified the philanthropic spirit of car collectors and contributed much to Barrett-Jackson’s charitable efforts on the auction block.”

Dave Ressler was definitely an original.

The son of a man who spent 25 years selling cars at Chase Chevrolet in Mandan, North Dakota, Dave joined the dealership in 1980 as a salesman and finance manager. He bought the place seven years later.

Other dealerships followed, as a did a collection of classic cars. Corvettes, mostly. He owned the world’s oldest Corvette (VIN number 003) and the first 2009 ZR1.

Dave became a regular at Barrett-Jackson auctions; he was the guy wearing flashy jackets that matched the color of the car he was buying. His showmanship was rooted in a joy of life, a feeling he loved spreading.

“When he entered an arena, everyone knew that he was on the scene,” Carolyn said. “He always made a statement.”

This past November, Dave died of heart disease. He was 61. Carolyn started Driven Hearts a month later.

Looking to honor his memory, she thought about what kind of grand gesture Dave might make. That’s how she came up with auctioning off his old car.

There was a catch, though: The gift had come with the promise that Nellie and Craig never sell it. So Craig and Carolyn asked Dave’s family for permission, explaining that all proceeds would support the AHA.

“It was a very emotional phone call,” Carolyn said.