Each year, the American Heart Association, in conjunction with the Centers for Disease Control and Prevention, National Institutes of Health and other government agencies, compiles up-to-date statistics on heart disease, stroke and other vascular diseases in the Heart Disease and Stroke Statistical Update. This is a valuable resource for researchers, clinicians, healthcare policy makers, media professionals, the public, and others who seek the best national data available on disease morbidity, mortality, and risks; quality of care; medical procedures and operations; and costs associated with the management of these diseases. The Heart Disease and Stroke Statistical Update is a major source for monitoring cardiovascular health and disease in the population. 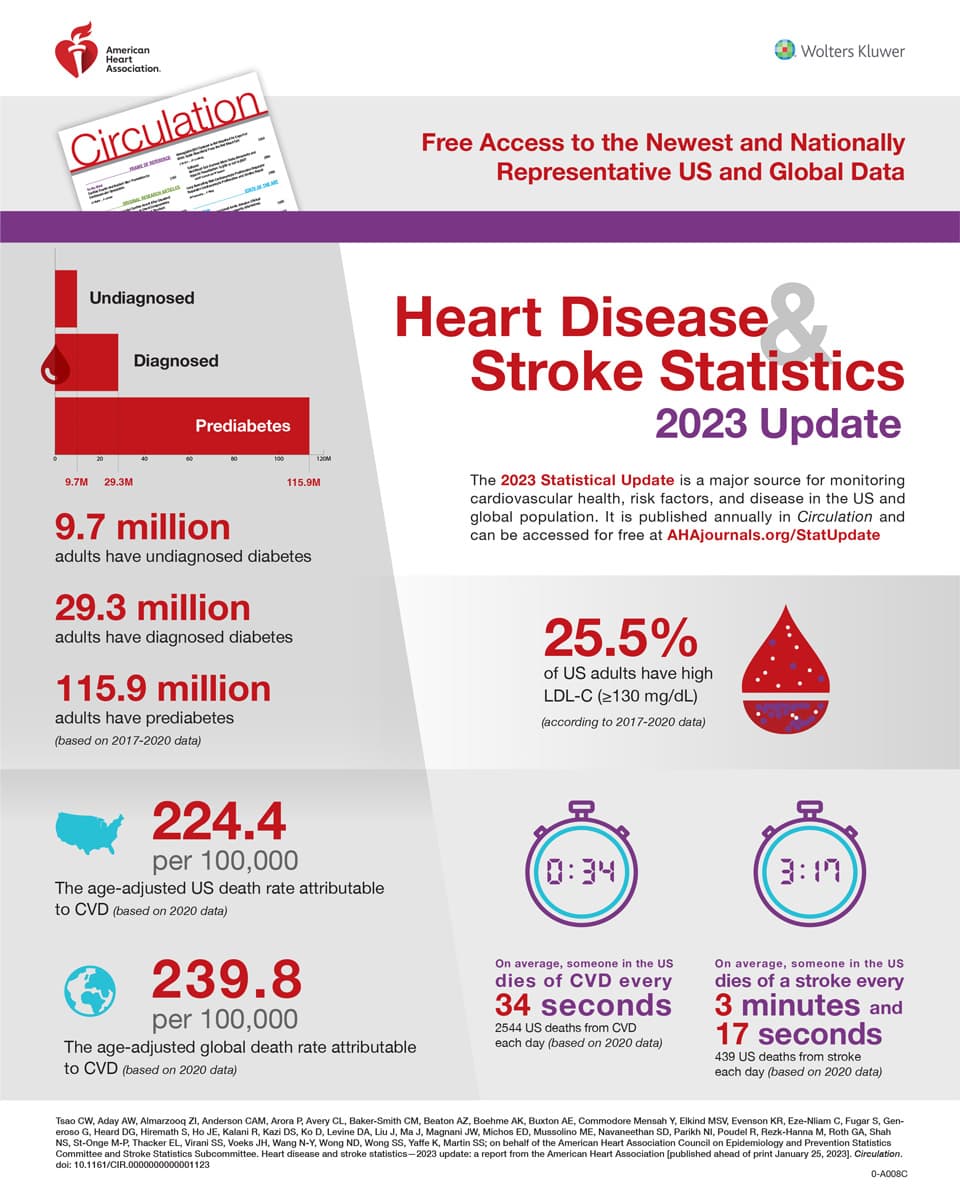 The 2023 Heart Disease and Stroke Statistical Update Toolkit represents a critical resource for health care professionals, health care administrators, researchers, health advocates, and others seeking the best available data on these factors and conditions. Cardiovascular disease produces immense health and economic burdens in the United States and globally. The toolkit includes At-a-Glance and Fact Sheets (in 7 language translations), and decks containing What is New and Updated in 2023 and Select Charts from the 2023 Update.

Prevalence is an estimate of how many people have a specific disease, condition, or risk factor at a given point in time. Government agencies periodically conduct health examination surveys. Rates for specific diseases are calculated from those surveys. These rates are applied as the population changes for several years, until a new health examination survey is done, and new rates are established. It’s important to realize that the prevalence rates do not change from year to year until there is a new survey. The annual changes in prevalence as reported in Heart Disease and Stroke Statistics Update only reflect changes in the population. It isn't possible to develop a prevalence “trend” by comparing numbers from yearly issues of the publication or its precursors.

Incidence is an estimate of how many new cases of a disease develop in a population in a given time period. For some diseases, new and recurrent attacks or cases are combined. The incidence of a cardiovascular disease in the United States is estimated by multiplying the incidence rates reported in community- or hospital-based studies by the U.S. population. The rates are not computed annually; they change only when new data are available. The estimates were revised to reflect the 2000 U.S. Census. Neither the incidence nor the rates should be compared with those in past issues of the Heart Disease and Stroke Statistics Update.

Mortality figures are the most accurate data available for assessing the impact of cardiovascular diseases and stroke. These data are compiled from death certificates and are sent by state health agencies to the National Center for Health Statistics. There the information is verified and tabulated by cause of death, age, sex, and race/ethnicity, for the United States and each state. This process is time-consuming. That's why there's about a two-year delay in the mortality statistics found in the Heart Disease and Stroke Statistics Update. Because mortality is considered “hard” data, it's possible to do time-trend analysis and compute percent changes over time.

What are Death Rates?

What about race and Hispanic origin?

What are "Major CVD" and "Total CVD"?

What are "Diseases of the Heart"?

The National Center for Health Statistics tabulated mortality of "Diseases of the Heart." The term is commonly used in its statistical publications and its compilation of the leading causes of death. This category groups diseases containing words referring to the "heart" and includes:

Visit our Interactive Cardiovascular Library for animations that help explain high blood pressure and many other cardiovascular diseases.